Compared to the previous year, there were only minor changes in the Group structure as of December 31, 2020.

Operating activities in the Consumer Access segment are mainly managed by the companies Drillisch Online GmbH and 1&1 Telecom GmbH – under the umbrella of 1&1 Drillisch AG.

In addition to these operative and fully consolidated subsidiaries, United Internet held a number of other investments as of December 31, 2020. These mainly consist of equity interests – held by United Internet Investments Holding AG & Co. KG – in the listed company Tele Columbus AG, Berlin (29.90%), as well as investments in the strategic partners Open-Xchange AG, Cologne (25.39%), rankingCoach International GmbH, Cologne (30.70%), and uberall GmbH, Berlin (27.56%). In addition, United Internet holds shares in AWIN AG, Berlin (20.00%), via 1&1 Mail & Media Applications SE – following the contribution of affilinet to Awin in 2017.

Further details on these investments and changes in investments are provided in chapter 2.2 “Business development” under “Group investments”.

A simplified illustration of the Group structure of United Internet with its significant operating subsidiaries and investments – as of December 31, 2020 – is shown in the following chart. 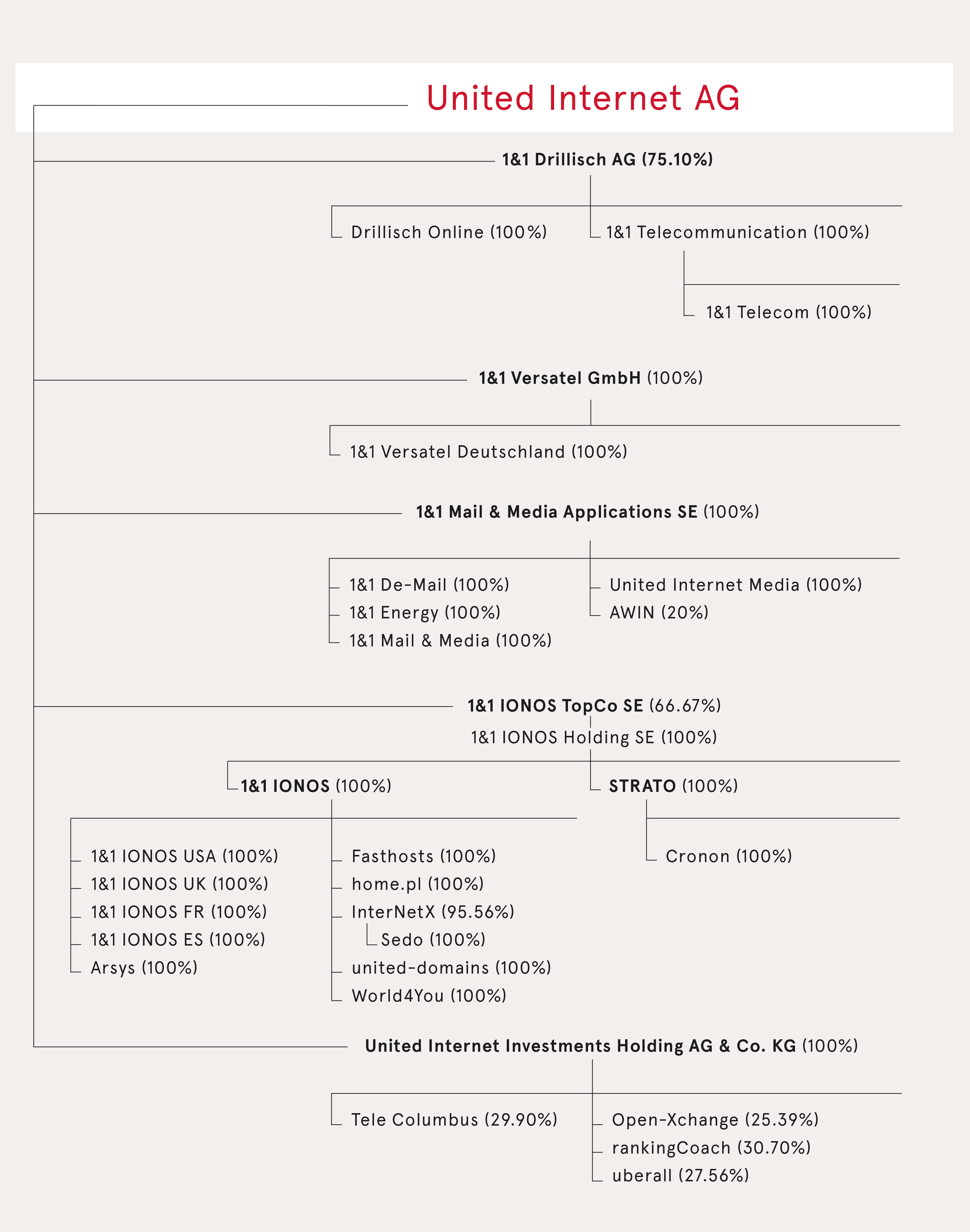 The Consumer Access segment comprises landline-based broadband products as well as mobile internet products (including the respective applications, such as home networks, online storage, telephony, or IPTV) for private users.

With its broadband products under the 1&1 brand (especially VDSL/vectoring and fiber-optic connections), United Internet is one of Germany’s leading suppliers.

The Company uses its own fiber-optic network (1&1 Versatel) and connects the “last mile” of its VDSL/vectoring connections (FTTC = Fiber-to-the-Curb) mainly via the Broadband Network Gateway (BNG)/Layer 2 infrastructure of Deutsche Telekom (or Layer 3 outside its own fiber-optic network). In the case of direct fiber-optic connections (FTTH = Fiber-to-the-Home), the “last mile” is connected via the FTTH home connections of leading city carriers and Deutsche Telekom (as of April 1, 2021). In the case of business with ADSL connections (currently being phased out), further advance service providers are used.

United Internet – indirectly via 1&1 Drillisch AG, acquired in 2017 – is the only MBA MVNO in Germany with long-term and guaranteed rights to up to 30% of the used network capacity of Telefónica Germany and thus extensive access to one of Germany’s largest mobile networks. In 2019, United Internet also successfully participated in the 5G spectrum auction and purchased two frequency blocks of 2 x 5 MHz in the 2 GHz band and five frequency blocks of 10 MHz in the 3.6 GHz band. The foundation was thus laid for the development of the Company’s own powerful mobile communications network in order to also extend its added value in this market – as in its landline market. In February 2021, 1&1 Drillisch decided to accept Telefónica Germany‘s offer – that was improved following review by the EU Commission – for national roaming. The conclusion of an agreement, which is expected by approx. mid-May 2021, would be a further important prerequisite for the planned rollout of the Company’s own network. In addition to its privileged access to the Telefónica network, the Company also purchases standardized mobile advance services from Vodafone.

These purchased network services are enhanced with end-user devices of major manufacturers, as well as self-developed applications and services in order to differentiate the Company from its competitors.

The mobile internet products are marketed via the premium brand 1&1 and discount brands, such as yourfone and smartmobile.de, which enable the Company to offer a comprehensive range of wireless products while also targeting specific customer groups.

In its Business Access segment, United Internet offers a wide range of telecommunication products and services for business customers via the 1&1 Versatel brand.

The core of 1&1 Versatel’s business model is a cutting-edge fiber-optic network with a length of around 50,900 km, which is one of the largest networks in Germany and is constantly being expanded.

In addition, 1&1 Versatel offers its business customers telecommunication products – from fiber-optic direct connections to tailored ICT solutions (voice, data and network solutions). In addition, the 1&1 fiber-optic network is offered for infrastructure services (wholesale) to national and international carriers and ISPs.

In the course of portfolio development over the past few years, the GMX and WEB.DE brands – the most widely used e-mail providers in Germany for many years now – have been expanded from pure e-mail service providers to complete command centers for the communication, information, and identity management needs of users.

Applications for home users are nearly all developed in-house (see 1.4 “Main focus areas for products and innovations”) and operated at the Group’s own data centers.

The products are offered as fee-based subscriptions (pay accounts) or – for free – in the form of ad-financed accounts (free accounts). These free accounts are monetized via classic – but increasingly also via data-driven – online advertising, which is marketed by United Internet Media.

United Internet markets its ad-financed applications and fee-based consumer applications via the GMX and WEB.DE brands primarily in Germany, Austria, and Switzerland, where it is among the leading players.

Since the acquisition of the US provider mail.com in late 2010, United Internet has also been driving its international expansion in this segment. In addition to the USA, mail.com targets other countries, such as the UK, France, and Spain.

In the Business Applications segment, United Internet opens up online business opportunities for freelancers and SMEs, helping them digitize their processes. This involves offering a broad range of powerful applications, such as domains, websites, web hosting, servers, cloud solutions and e-shops, group work, online storage (cloud), and office software, which customers can use via subscription agreements.

Based on its tried and tested, million-selling hosting packages, the Company has expanded its product range over the past few years with the addition of numerous cloud-based e-business solutions.

The applications are developed at the Company’s own development centers or in cooperation with partner firms and operated on over 90,000 servers at 10 data centers.

In its Business Applications segment, United Internet is also a leading global player with activities in Europe (including Germany, France, the UK, Italy, the Netherlands, Austria, Poland, Switzerland, and Spain) and North America (Canada, Mexico, and the USA).

Business applications are marketed to specific target groups via the differently positioned brands IONOS, Arsys, Fasthosts, home.pl, InterNetX, Strato, united-domains, and World4You. Via the Sedo brand, United Internet also offers customers professional services in the field of active domain management, while we22 (acquired on February 1, 2021) offers other hosting suppliers a white-label website builder for the creation of high-quality websites.

The Management Board of United Internet AG comprised the following members in the fiscal year 2020:

Management Board members as at December 31, 2020

Departed in the fiscal year 2020

Frank Krause, Chief Financial Officer of United Internet AG, informed the Supervisory Board in May 2020 that he did not intend to extend his Management Board contract, which expired at the end of 2020. Mr. Krause left United Internet after five years at his own request to take on new professional challenges.

As his successor, the Company’s Supervisory Board was able to recruit Mr. Martin Mildner, the former General Counsel and Group Vice President M&A of the Otto Group, who took over responsibility for the position of Chief Financial Officer of United Internet AG as of October 1, 2020.

Together with the Otto Group Executive Board, Mr. Mildner actively shaped and significantly developed the company portfolio of the Otto Group over the past 13 years. He played a leading role in many company transactions, such as the support of About You from the first beginnings in 2012 to Unicorn in 2018, the sale of the 3Suisse Group, Fegro Selgros, Otto Office or Sport Scheck. In addition, he continuously developed the Group Legal Department and the Group-wide Compliance Management System of the Otto Group.

The Supervisory Board of United Internet AG was re-elected by the Annual Shareholders' Meeting 2020 and expanded to six members.

The Supervisory Board of United Internet AG comprised the following members in the fiscal year 2020:

Supervisory Board members as at December 31, 2020

Departed in the fiscal year 2020

Germany is the most important sales market of the United Internet Group by far and accounted for over 91% of total global sales in the fiscal year 2020.

Besides Germany, the Group’s most important sales markets are

Following the merger with Drillisch (now 1&1 Drillisch) in 2017, United Internet is the fourth force in Germany’s telecommunications market with landline and mobile products in its purely domestic Consumer Access segment – based on customer contracts, sales revenues and profitability – after Deutsche Telekom, Vodafone and Telefónica Germany.

In its Consumer Applications segment, United Internet operates in Germany, Switzerland, and Austria via the GMX and WEB.DE brands, as well as in countries such as the USA, UK, France, and Spain via the international brand mail.com. United Internet is the leading provider of e-mail services and one of the leaders in cloud services in its domestic German market – based on the number of users.

As of December 31, 2020, the United Internet Group employed a total of 9,638 people at over 30 domestic and foreign facilities.