Customer Satisfaction in the Consumer Applications Segment: GMX and WEB.DE

We ask roughly three million customers every year for feedback in the e-mail, homepage, and editorial content areas. For example, we poll them on usability, storage space, and loading speeds, as well as about the editorial selection of topics and the content produced. We lifted the NPS from 25 to 30 points in 2020. Once again, user satisfaction was stable in 2020 at the high prior-year level of 80%. In addition, we measured a third core KPI, customer trust, continuously in the reporting period. In 2020, this was an excellent 88% (2019: 87%). At segment board level, the CEO and the Chief Product Officer (CPO) are closely involved in customer satisfaction measures.

As part of our customer-centric focus, we developed a customer value pyramid as a way of depicting our three core KPIs: customer satisfaction, recommendations, and customer trust: 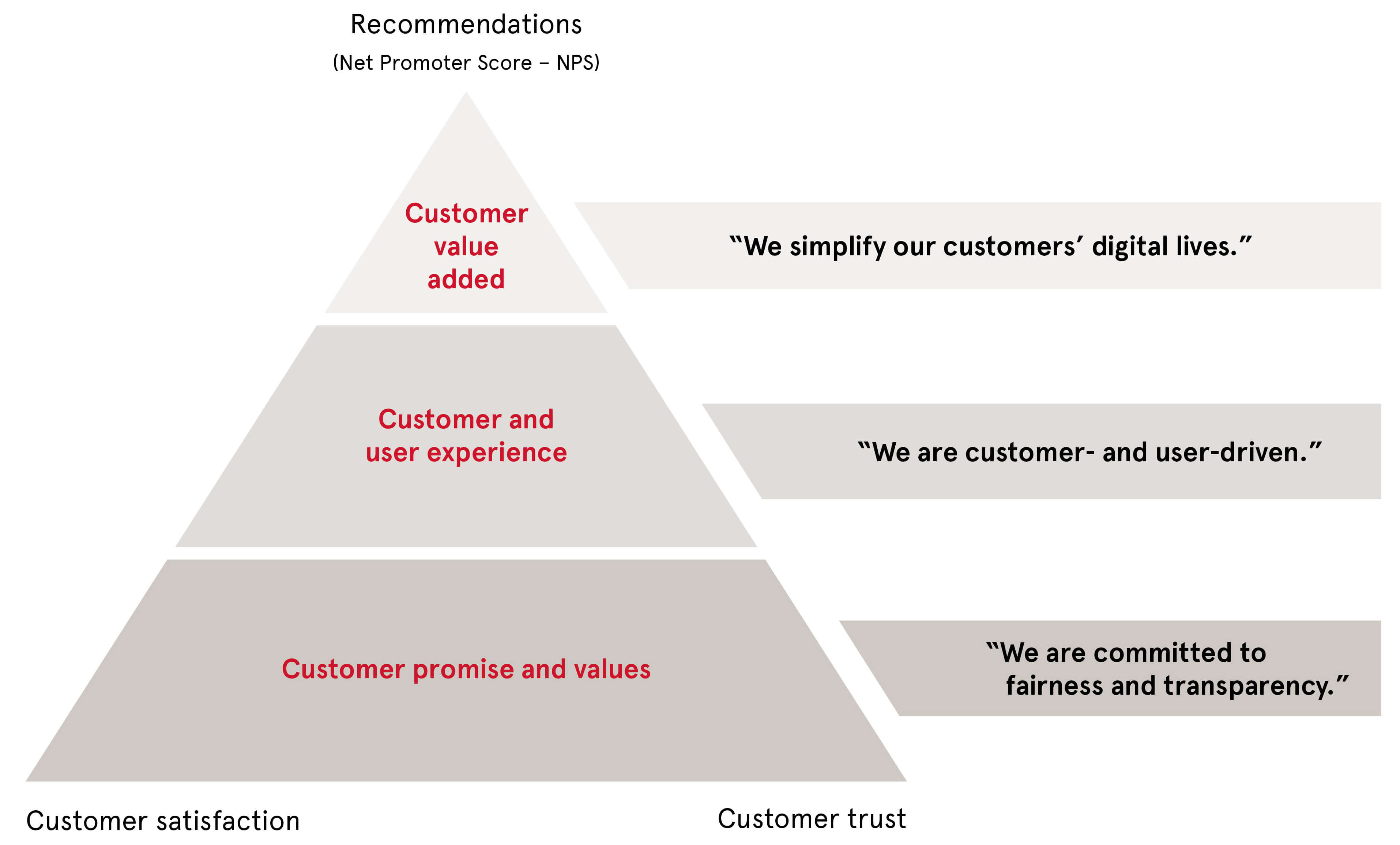 Our internal results are regularly validated in independent studies. For example, “WirtschaftsWoche” concluded that, once again, GMX was the e-mail provider enjoying the highest level of customer trust in 2020. The business magazine worked with ServiceValue and Frankfurt’s Goethe University to produce Germany’s most extensive trust ranking. A total of 1,911 companies from 150 sectors were evaluated using an online survey of 577,122 internet users. It should be noted that the respondents were actually past or present customers (consumers and contract partners). Nearly four out of five respondents (78.3%) said that they trusted GMX. The brand received the “highest customer trust” ranking for the sixth year in a row. WEB.DE had a trust index score of 74.5%, resulting in a “very high trust” rating.

In addition, the “Focus-Money” magazine commissioned an initial cross-sector study on German customer satisfaction with leading individual brands in 2020, once again together with ServiceValue. Both GMX and WEB.DE received “highest customer satisfaction” ratings in the “E-mail provider” category. A total of 1,341 enterprises from 61 sectors were assessed by asking more than 274,000 consumers what exactly they think about different providers. Votes were only counted if respondents were customers of the enterprise concerned in the last twelve months.

Other indicators of customer satisfaction are the user reviews of GMX’s and WEB.DE’s e-mail apps. The Android versions of the apps available from Google Play Store have a rating of 4.3 out of 5 stars, while the two brands’ apps in Apple’s iTunes Store score an even better 4.6 out of 5 stars.